I decided at the beginning of the year that I was going to use up everything that I have in my beauty and makeup stash before I could buy anything new. A tall order when you love lotions and potions as much as I do…but definitely much needed. I mean in terms of scale of what I have in comparison to the volume of what you see online, my small stash is not much at all, but it was building up and there’s only so much product one girl can use. And so Project Empties (or Project Pan) as some people are calling it was born. I gave myself one small allowance – as soon as something was empty, as long as I didn’t have any sort of backup waiting in line, I could go and buy new.

How’s it going then? So far, so pretty easy. There’s a deep sense of satisfaction at actually reaching the end of anything and it’s definitely fair to comment that I’m saving money. I’ve *almost* slipped a couple of times – man, I want to try some MILK makeup sooooo badly! But I’ve stuck by my guns, the willpower is strong friends! Six weeks into the new year and here’s what I’ve emptied so far. 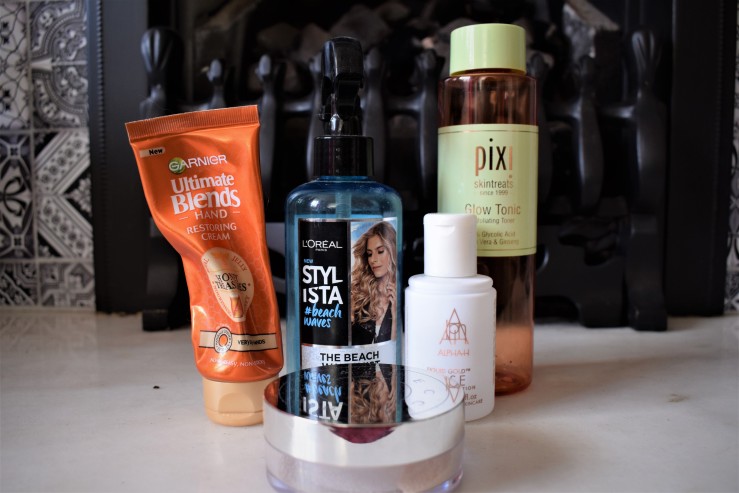 I decided I’d take my photo and then do a little mini review so that you can find out a bit more about the product and decide if you want to give it a go. It’s a plan, right?

Pixi Glow Tonic
I’m hands down going to say that I love all things Pixi. I’ve tried a few things now and the Glow Tonic is one of the best so far! An exfoliating toner with 5% Glycolic Acid, Aloe Vera and Ginseng, it’s a really good starting point if you’re venturing into the worlds of acids. Super easy to use, it truly does what it says on the tin and leaves you glowing. I tend to use it at night, every other day and I can visibly see that it smooths out the surface of the skin. If you’re having a bad skin week it’s great to just calm everything down and let you see your true skin return. Highly recommended, it’s paraben free and not tested on animals which is an added bonus if you’re looking for cruelty free. I’ve got a mini one of these lined up to replace this 250ml bottle but will definitely repurchase.

Alpha H Liquid Gold: Rose Limited Edition
This came in my Marks and Spencer Beauty Calendar in 2017 and I’ve only just finished up this tiny bottle. I was slightly nervous as I knew it was a more intense, concentrated acid and so I tended to only use this once a week. Even then it made my eyes water – I didn’t go near my eyes with it of course, it just made them water badly! I liked the rose scent but I’d probably pick the Pixi Glow Tonic over this, mainly because it doesn’t make my eyes sting!

L’Oreal Styl-Insta Beach Waves
Always and forever trying to find the perfect hair product, this is just one of about a gazillion sprays that I’ve tried. It was okay but not brilliant. It left my hair feeling really tacky and sticky and tended to dry down pretty crunchy which is never a good thing. The spray gun was also pretty tricky to handle. I tend to go in from all angles when I’m spraying my head and it really struggled when it got tipped upside down. First world problems or what?! I doubt I’ll repurchase but it also wasn’t the worst spray I’ve ever tried so call it average and let’s be done.

Garnier Ultimate Blends Honey Treasures Hand Cream
Hand cream is a bit of a funny one isn’t it? It’s something I use every single night and like the hair products, I’m always and forever trying new ones but not for the same reason. Mainly because there’s so many of them available and I seem to be working my way through them all! This one had a nice scent, absorbed really quickly, didn’t leave you with greasy hands and only cost about a fiver. Win-win really. I would repurchase…but only after I’ve tried all the other ones out there so come back to me in about 5 years time – ha!

Becca Hydra Mist Set and Refresh Powder
Well call me enabled. I saw this allllll over socials over the summer and was desperate to get my hands on it because people absolutely RAVED about it. I think they were at a different party to me though because from opening the jar I was disappointed. I’m rarely a Debbie-Downer but the hype around this was so high I just want to put in my reality of using it.

First up at £35 a pot I didn’t expect it to feel *quite* as cheap as it does. I was hoping for a really good heavy lid. Nope, it might be oh-so-shiny but it’s cheap and plastic. I opened said cheap plastic lid, lifted up the second plastic part of the lid and it promptly broke off in my hand. Not a great start. I managed to get it back on but it definitely didn’t secure it fully and after a daily battle of almost two weeks I just sacked it off and chucked the second plastic lid bit away.

The powder itself was very nice indeed. That strange combo of wet feeling yet drying down to a lovely veil was truly divine and I can see why people love the product. But the packaging deeply lets it down for me. Towards the end it was also really hard to get the powder out without basically tipping it upside down and into the lid which ended up in massive wastage.

Overall it’s fair to say I was gutted. I’d fallen for the hype only to be let down so badly. To the point where I’m reluctant to look into trying any other Becca products, which seems to be a real shame as the actual products themselves seem to be amazing. I mean, I know it wouldn’t do if we all were the same and loved the same stuff but ouch, this one hurt.

And there you have it. First batch of Project Empties. Let’s see what comes next time, eh?